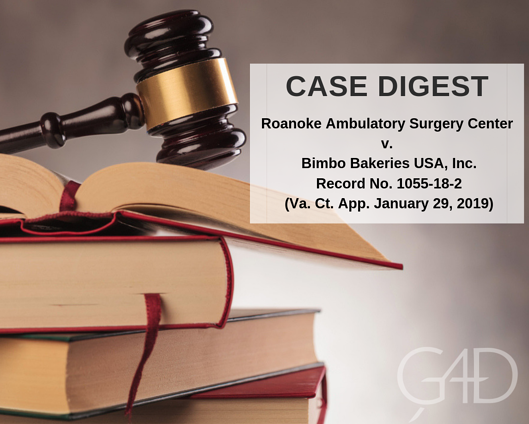 On January 29, 2019, the Court of Appeals of Virginia published a decision clarifying the period of time a healthcare provider has to file a claim with the Virginia Worker’s Compensation Commission challenging the amount of its bills paid by an employer or insurer under the Virginia Worker’s Compensation Act.  The decision is Roanoke Ambulatory Surgery Center v. Bimbo Bakeries USA, Inc., Record No. 1055-18-2 (Va. Ct. App. January 29, 2019).

The decision turned on the interpretation of Va. Code § 65.2-605.1(F) (1950 as amended).  This statute provides that a healthcare provider may not file a claim with the Commission contesting the sufficiency of payment for healthcare services rendered to an injured worker after July 1, 2014, unless  the claim is filed within one year of the date the last payment is received by the healthcare provider or within one year of the date the Commission’s award covering such treatment or service becomes final if the employer or insurer denied or contested payment of any portion of the healthcare services.   The Commission held that the first limitation period applied in the case because the insurer voluntarily paid the medicals bills (though at a reduced rate) before the entry of an award by the Commission, but the Court of Appeals disagreed and held that the second limitation period applied because the insurer “contested” a portion of the healthcare services when it reduced the amounts the provider billed.

Without an Appeal, the Decision will Govern Filing of Claims Challenging Reduction in Medical Bills

It is unknown at this time whether the employer and insurer will ask the full Court of Appeals or the Supreme Court of Virginia to hear an appeal of the case.  If they do appeal the decision, they may argue that the Commission was correct in its interpretation of the statute because the interpretation by the Court of Appeals renders the first limitation period meaningless as every reduction of a provider’s bill would constitute a contest of the bill that would make the first limitation period unnecessary.  As the Virginia General Assembly included both limitation periods in the statute, however, the Commission and Courts will need to find a way to reconcile them.  Unless the employer and insurer appeal or the Virginia General Assembly amends the statute, the decision will govern the filing of claims for challenges to reductions in medical bills in workers’ compensation cases going forward

The full decision is available here.