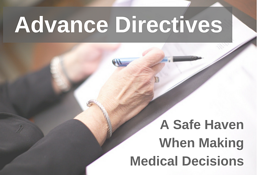 by A. William Charters and Jeff Kiser

Advance Medical Directives are the most prevalent guidance documents seen by hospitals and medical professionals nationwide. In 1990 Congress passed the Patient Self-Determination Act[1] requiring healthcare providers to inform patients of their rights to make predetermined decisions regarding their medical care. Since then, advance directives have consistently increased in popularity and are accepted in all fifty states (Between 2000 and 2010, patients 60 years or older who died with an Advance Directive rose from 47% to 72%).[2]

Often, healthcare professionals are tasked with interpreting and implementing a course of action based on incomplete or misunderstood parameters contained in a “legal document”. Unfortunately many of these directives were drafted by individuals who do not have a thorough understanding of the medical, or legal, implications of the verbiage they have chosen resulting in a document that is subject to misinterpretation or is simply ineffective.

One of the first hurdles faced by healthcare professionals are the conflicting laws between states since not everyone follows the same processes or mandate the same requirements for a directive to be valid. It is important, therefore, for healthcare providers to be cognizant of their own state’s laws regarding acceptance and enforcement of foreign directives. While the predominant standard is to honor a validly executed directive from another state, not all states follow this protocol. Equally as impactful is the difference in law as to the powers that may be granted to the Healthcare Proxy (i.e. the representative named in the document). Virginia, for example, does not recognize the Death with Dignity Act (or any other physician assisted end of life program), but a nearby neighbor, the District of Columbia, does.

Validly executed Advance Directives are able to not only provide evidence of the intent of the patient, but can concomitantly lessen the degree of family/physician uncertainty when difficult decisions need to be made. Proactively making end of life decisions, in particular, can relieve family members of guilt and can relieve family members of guilt and intrafamilial conflict if the patient has already evidenced their own decision. The provisions of a valid Advance Directive are virtually unassailable (by family or physician) and provide a safe haven for the decision-making process[3].

While these rules and the rest of the Health Care Decisions Act offer aid and guidance, they are most effective when implemented on a proactive rather than reactive basis. The time to inquire about the status of a patient’s Advance Directive or to provide resources for him or her to have such a discussion with friends and family is early in the process, even as soon as the initial intake. The time to educate yourself and your practice on the many facets of Advance Directives and establish a protocol for how you and your employees will determine if an Advance Directive exists for a given patient and how to insure it is valid and enforceable is now.

Next up:  What if you, as a treating physician, believe that the treatment demanded by patient or decision maker is inappropriate?