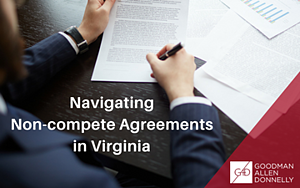 Virginia courts typically focus on the following three factors to determine whether a non-compete will be enforced:

Typically courts will analyze all three factors at the same time and give equal weight to each factor. Each non-compete agreement will be judged based on its own merits including the circumstances of the employee and the business and other underlying facts. In addition, the employer bears the burden of proof in establishing reasonableness.

Virginia has several traps for the unwary:

Sometimes employers operate in multiple states or have employees who reside in multiple states. In those situations, we typically work with the lawyers in our Primerus network of firms across the county and the world to ensure that the non-compete has the best chance to be upheld in other states or countries.

Please let us know if we may assist in the preparation or review of a non-competition or non-solicitation agreement.

A modified version of this article was published in Hampton Roads Physician Summer 2018 issue.