What is an Interview with a Patent Examiner?

A patent examiner interview is a mechanism for speaking with the patent examiner about a patent application and claims. It can take place in person at one of the U.S. Patent and Trademark Office (USPTO) locations, by video conference, or by telephone.

Most business with the USPTO is conducted in writing. The applicant files a patent application, the examiner responds with an Office Action, which either sets forth the results of the examiner’s prior art search and the reasons for rejecting the patent claims, and the applicant responds with written claim amendments and arguments to support the patentability of the claimed invention.

Most of the time, a simple telephone interview is sufficient to communicate about the application with the examiner. This type of communication permits some immediate feedback and give-and-take between the parties. If a demonstration of the invention would be helpful, a video conference may permit such a demonstration. If the application is particularly important to the applicant, or if it would be helpful to meet the examiner in person, such as when the inventor wishes to attend or if I may have a number of applications before that examiner, an in person interview may be the best strategy.

Why Conduct an Interview?

Once I’ve been through a round of written responses with a patent examiner, if I feel that the examiner is not being receptive to my position, I will conduct an interview with the examiner. Often, the examiner will indicate that he or she had not fully grasped the arguments for patentability before and now better understands the distinctions between the claimed invention and the prior art.  Even in cases where I don’t get the examiner to agree with me, we usually understand each other’s position much better which enables me to better advise my client on how best to proceed with the patent application.

An Interview Does Not Always Grant Allowance, but Helps Chart the Next Steps

In any event, even if the interview does not result in allowance of the claims, I have more information about the application and the examiner’s position than I did prior to the interview.  I can advise my client that the examiner will not be persuaded.  Perhaps we are more likely to get a positive result through appeal rather than another round of responses.

Interviews Do Not Eliminate Necessary Paperwork

Interviews are not a way to avoid making comments on the record that become part of the prosecution file.  If there is an outstanding office action, most examiners will require the applicant to send in a proposed amendment or set of arguments that will become a part of the record.  This can sometimes be avoided if the interview is conducted after a response has been filed.  After the interview, a written summary is prepared by both the examiner and the applicant that becomes part of the file.

Nonetheless, if I determine during an interview that a particular argument is clearly not going to persuade the examiner, and I don’t think the argument is vital to the case, I may omit it from my next response, thereby keeping it out of the record.

Work With, Not Against, theExaminer

The USPTO has also seen the benefits of interviews and has been encouraging them in recent years. In certain instances, it may be possible to conduct an examiner interview prior to a first office action or after a final rejection. Examiners typically appreciate the interviews as well because they can help them to move applications toward a final resolution more quickly than simply continuing with multiple rounds of written responses.

Having a conversation with the patent examiner can be effective in arriving at the desired outcome, establishing common ground between the parties and providing an opportunity to discuss and resolve issues. 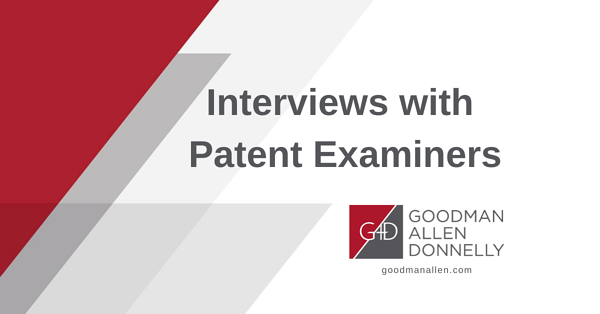