To prevent importation of products that infringe US companies’ patent, trademarks, and other intellectual property, a patent owner may bring an action in the International Trade Commission (ITC) in Washington, DC. 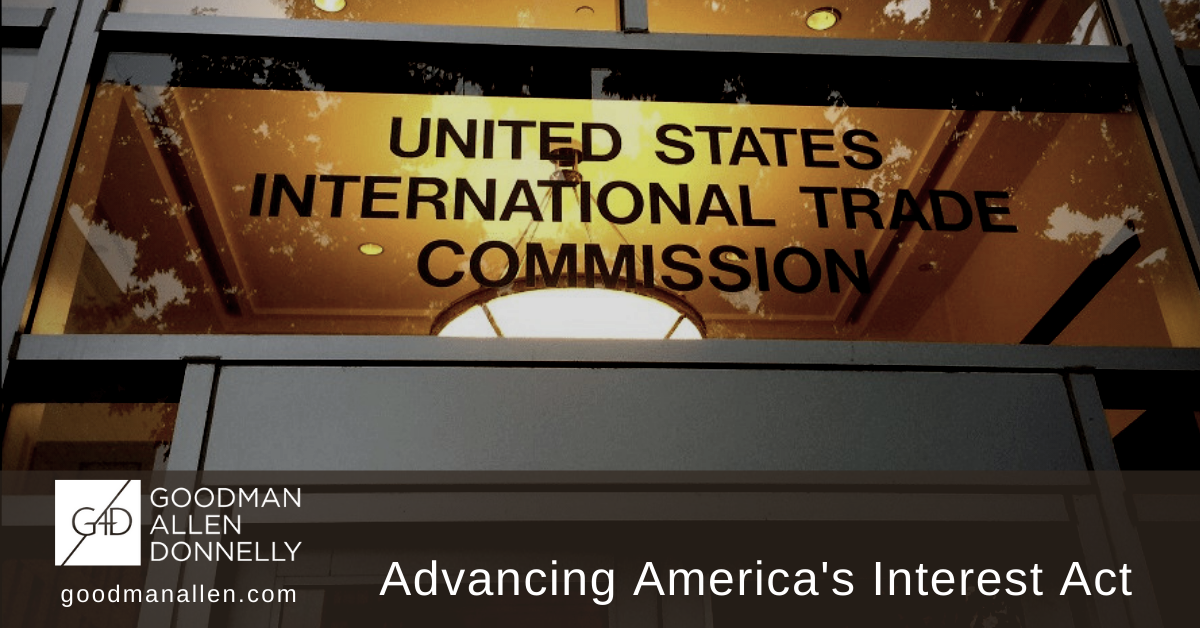 During the current Covid-19 pandemic, there is a worry that there may be disruptions in the supply chain for imported products from abroad. To address these potentially conflicting issues, several members of congress have introduced an amendment to the law related to these ITC actions.

What is an ITC Section 337 Action?

Under section 337 of the U.S. Tariff Act of 1930, a party may bring an action for unfair competition related to trade matters against entities that import products into the United States in the International Trade Commission. Such matters include actions to stop importation of products that infringe US intellectual property rights, including patents, trademarks, and other types of counterfeit goods.

The ITC cannot award monetary damages for patent infringement, but can award a rather powerful remedy called an “exclusion order.” This order is basically an injunction that requires US Customs and Border Patrol agents to seize products that violate US IP rights. These actions have been particularly attractive because cases at the ITC generally proceed more quickly than in the US courts and it is easier to gain jurisdiction over a foreign entity than in the US courts. In recent years, it has become more difficult to acquire an injunction against infringement from the courts. Thus, a lot of entities have turned to the ITC for relief.

What is the Domestic Industry Requirement?

Not just anyone with a patent can apply for relief from the ITC. The Act requires that the party seeking an exclusion order show that it has “Domestic Industry”, i.e., that it has made significant investments in the US in plant, equipment, labor, or capital related to products seeking to practice the patent, or that it is making substantial investments in research and development, engineering, or licensing of the patent. Critics have argued that non-practicing entities (NPEs) have abused the ITC process by failing to demonstrate adequate domestic industry practices. The critics argue that the ITC was meant to be used by companies that are actually working toward bringing patented products to market, as opposed to those that simply seek to license their patents.

Is an Exclusion Order in the Public Interest?

A general exclusion order that may be issued by the ITC is seen as an equitable remedy under the law. When issuing an equitable remedy, courts and the ITC must balance the interests of the parties to determine whether an injunction would be warranted. They are also required to take the public interest into account. If the public would suffer sufficient harm due to an ITC exclusion order or court injunction, the equitable remedy should not be issued. In the courts, the determination is usually made that money damages would compensate the patent owner. Given that the ITC cannot award monetary damages, the current practice is to presume the granting of an exclusion order in the case of infringement.

Reps. Suzan DelBene (D-WA) and David Schweikert (R-AZ) introduced H.R. 8037 in an attempt to make it more difficult to an obtain exclusion order from the ITC. They cite concerns regarding the US supply chain during the time of the Covid-19 pandemic as a reason for the proposed changes. With many more people working from home, they worry about problems with obtaining supplies, such as laptop computers.

Another major amendment introduced by the bill would require the ITC to “affirmatively determine that any exclusion serves the public interest.” This would eliminate the current presumption in favor of exclusionary relief if a violation of the law is found by the ITC. Since the ITC cannot award monetary damages, the public interest requirement could result in a patent being infringed with impunity.
H.R. 8037 has been referred to the Committee on Ways and Means. So far, no corresponding bill has been introduced in the Senate.

For help with your patent or intellectual property needs, please contact Matt Osenga at (804) 565-3531 or mosenga@goodmanallen.com.